It is under the dimmed lights of a vintage-decorated Kreuzberg bar that indieBerlin met the cheerful Rory Midhani to discuss his new and exciting installation at AKA gallery. The exhibition called ‘A Little Bit Larger Than Life’ is an impressive reflective work on queer people’s place in our world and how social norms decreases their […]

It is under the dimmed lights of a vintage-decorated Kreuzberg bar that indieBerlin met the cheerful Rory Midhani to discuss his new and exciting installation at AKA gallery. 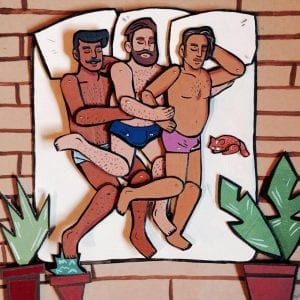 The exhibition called ‘A Little Bit Larger Than Life’ is an impressive reflective work on queer people’s place in our world and how social norms decreases their voices and place as important and valuable individuals. Rights for which they keep fighting for.

Midhani’s work not only puts queer and trans people on the forefront of his creation and of AKA’s gallery walls, but he also represents them grand, visible, in bold black lines and living a joyful and carefree existence. Pride, acceptance and cheer were floating in the air at the exhibition’s opening.

The artist’s history and activism

Rory Midhani arrived in Berlin six years ago from Birmingham, UK and created a 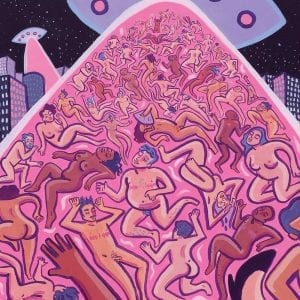 name for himself in the queer artistic scene. He decided to move to eclectic Berlin for friends he had already made in the city, and the incredible Berlin queer and trans community. Starting as a call-center employee, he now uses his versatile and striking talents to empower the LGBTQI+ community and represent strong, colorful, powerful and sexy queer characters.

Midhani’s style is unmistakable and incredibly versatile. From fun and colorful cardboards to black and white minimalist murals, socially-denouncing cartoon drawings, rich and pastel posters and fem or masc portraits, Midhani’s art is at the right place between real life and fantasy, sweetness and sleaze.

If his artwork was not always so queer, his current characters were something that came to him naturally. He hopes his creations inspire joy, light and hope to queer people around the world. It certainly does, as his natural force of personality and charisma resonates through his vibrant figures.

An impressive dedication and ingenuity

His installation at AKA gallery is an impressive work that he realized in 20 hours. The fresco is inclusive, luminous, positive and 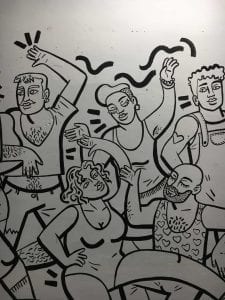 inspires ebullience to anybody that has the chance to admire it. Rory Midhani met the gallery’s curator, in a call-center. That is where they bonded and indeed, when the gallery had the idea of giving life to the its walls before their re-decoration in February, they immediately thought of Midhani’s creations.

In his own words, Midhani’s energetic, affectionate, fun and cheeky creations are giving a second existence and breath to AKA’s walls. The black designs, bodies and spirits that cover the previous emptiness are representative of Midhani’s will to bring cheerful queer characters to life. Rory Midhani’s skillfulness and dedication to his community are some of the artist’s greatest strengths. To have, in the Berlin artistic scene, an artist that represents queer people in such a simple, natural, funny and benevolent way, is a cultural and societal necessity.

We thoroughly invite you to admire Rory Midhani’s fresco at AKA gallery and maybe, leave with some of his brilliant merch!