If being a professional drag queen already is a very demanding job, Sheila Wolf is, on top of this, a successful entrepreneur in the entertaining business as well as a burlesque icon. You may have heard of the Vaudeville Variety Burlesque Revue, one of many legendary events that Sheila Wolf produces and hosts with passion […] 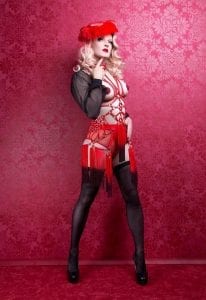 If being a professional drag queen already is a very demanding job, Sheila Wolf is, on top of this, a successful entrepreneur in the entertaining business as well as a burlesque icon.

You may have heard of the Vaudeville Variety Burlesque Revue, one of many legendary events that Sheila Wolf produces and hosts with passion and flair. She also is the creator of the Boylesque Drag Festival and the Burlesque Latenight Hotel Gl’Amouresque. With sold out shows, international headliners, haute couture red carpets and performances of her own, Sheila Wolf certainly is one of Berlin’s most influential and busiest drag queen.

indieBerlin talked to Sheila about her 17 years long career in drag, how the success of her events reinvent modern entertainment and how she pushes gender and queer barriers being a straight drag queen.

Could you tell us about your drag persona?

I would say I’m not doing too much drag. I’m not wearing very big hair or heavy make up. My style is feminine and quite rockabilly. Sometimes drag can be too much and I try not to be kitschy or shady. Also my drag style is very glittery. I always am covered in Swarovski crystals. I always want to wear haute couture as I do not want to be one of these Kik or Primark queens, we have enough of that! Of course when I started as a drag queen, I wore clothes from Top Vintage for example, but that isn’t my style anymore. It’s very important for my persona to have style and for drag queens in general. If you don’t have style, you are just a man in a wig. That is why I’d rather spend money on designers who create outfits especially for me, in order to look stylish and different from other performers.

Why led you to drag?

In the beginning I did it just for fun. I wanted to have the ability to create a different persona for a very long time. I started as a 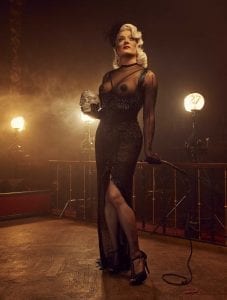 party transvestite in 2004 and before that, I posted a picture of myself on Yahoo and people told me I looked great. That’s when I thought I could continue this journey and go out more as my persona. It was the best feeling in the world to be able to express myself and be creative. At first my wife didn’t like that I was going out. I think she was afraid I would become gay or transgender. In the end she helped me with my make up and wigs so I didn’t look too crazy out there.

But yes, I’m a straight guy and I have a daughter. My wife is my love and she accepts my hobby and my passions. Drag is a lot of fun for me. It’s as if I was on holiday for a night. Of course my career evolved and after a couple of years, Germany’s first burlesque company contacted me to join them. That’s when I had the chance to win the second prize at a straight burlesque show. I thought, if a straight audience is ready to let a transvestite or drag queen win their competition, maybe there is a possible success here. I decided I would invest myself into this with passion.

Since you started seventeen years ago, how would you say the german drag scene changed?

The drag scene in Germany changed a lot! It’s growing so extremely especially after RuPaul’s Drag Race success. Millions of people want to be professional drag queens nowadays. Especially a lot of influencers on social media that are, in my mind, not qualified enough to be called performers. Now drag is about making money and when I started people were more focused on having fun in their persona. I’ve had the chance to see the best of burlesque entertainment for the last 25 years so I can say that when I see some recent drag performances, to me their aren’t real, high end performers. Between 2000 and 2010 there were a lot of funny content and potential in underground drag performances. Drag queens told a story and storytelling is essential in a performance. It’s been four years now that I’ve been doing the Werq The World Tour from RuPaul’s Drag Race and I can see young audiences crying and screaming in front of queens that are just standing there or going from one side of the stage to the other. It’s too bad because there are some very talented RuPaul’s Drag Race contestants like Bianca Del Rio who’s very funny or Jinkx Monsoon and Adore Delano that have incredible voices.

To you, what’s the impact of shows like Drag Race or Queen of Drags ?

I did the casing for Queen of Drags, they approached me and asked me to be in the cast. Which was an honor because only 40 queens are selected. I told them I would love to be a part of the jury as I’ve bene doing drag for quite a long time now. But they already had their jury completed at the time so I asked them what will I get if I participated to the five weeks in Las Vegas as a contestant. Their answer was : fame. And of course, TV gives valuable and important exposure but I didn’t want to do the TV show for free. I did a documentary on Galileo for ProSieben and I had people commenting about it on TikTok or other social media. So it shows people do still watch TV.

How is it like being a straight drag queen in Berlin?

When I first arrived to Berlin, nobody knew I was straight. Then I realized being straight was a stand alone thing for me. There are a lot of good queens and performers in Berlin but there are no straight guys doing drag publicly like I do. And people don’t expect it. I like the fact that it’s opening the queer scene for straight people and encouraging harmony. I never struggled during my career but I do have the feeling that a few queer and gay magazines aren’t supportive of my shows because to them, I’m not a part of the LGBTQI+ community. However I was never attacked because I was straight. On the contrary I happened to be annoyed by straight idiots because they thought I was gay. 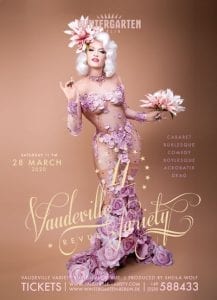 You produce and host so many events, which is the production you are the most proud of?

I’m really proud of the Vaudeville Variety Burlesque Revue because it’s Berlin’s biggest variety and burlesque show. The reputation of the festival is very positive and that gives me the opportunity to invite US burlesque superstars to Berlin such as Raquel Reed that will be performing at the 2020 edition of Vaudeville. I try to treat artists and performers in the best way I can. The festival also takes place at Wintergarten, a very prestigious venue in which you wouldn’t expect a burlesque queer event to happen. Recently, I was also very happy with the Boylesque Drag Festival, happening at the Tipi. It ended up being a marvelous show that the public really enjoyed.

Sheila Wolf was announced on 21st Century’s Burlesque List as the top 5 performers to see in Europe and 55th in the world. Her worldwide recognition as a burlesque star and accomplished producer is irreproachable. However, she is never out of creative ideas and revolutionary productions. In fact, additionally to a dazzling edition of the Vaudeville Variety, Sheila Wolf will soon announce the reedition of Europe’s largest queer ball. The event’s last edition appeared to be in the 90s and welcomed more than 4000 guests. This time, the ball is brought back in order to encourage unity between straight and LGBTQI+ people and of course, to have a party! The event will take place on April 18th and promises an incredible line up composed of, especially, Conchita Wurst and Berlin’s most promising emergent artists.

Sheila’s dedication to her high end entertaining shows and burlesque drag career is an inspiring and motivating factor for all arising performer. In fighting for the best quality in every aspect of her career, Sheila Wolf has made a name for herself and is now the leader of the burlesque scene in Berlin as well as a representation of artistic ambition at the service of a hope for change.

Don’t miss the 2020 edition of the Vaudeville Variety Burlesque Revue featuring some of the greatest names in entertainment and offering diverse, queer and sumptuous performances.