We spent a very heartwarming moment with talented artist Linus Cuno in his own home, in which we discussed his creations, their roots, his ambition for his art as well as his promising musical career. It was seated on his homemade lemon painted couch, that Linus answered our questions with as much humility as joy. […]

We spent a very heartwarming moment with talented artist Linus Cuno in his own home, in which we discussed his creations, their roots, his ambition for his art as well as his promising musical career. It was seated on his homemade lemon painted couch, that Linus answered our questions with as much humility as joy.

indieBerlin: What artistic techniques allow you to express yourself in the most effective way ?

It depends on what I’m actually working on. Sometimes, I really like working with oil and most of my paintings are oil paintings. I 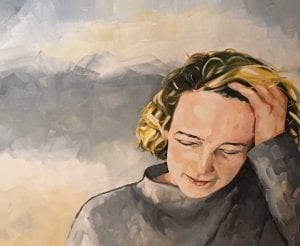 also love when I can paint people because I feel like they are evolving out of my brush strokes. And I really like the vibrancy of oil color.

indieBerlin: Did you always know you would live from your art?

Not at all, I tried so many different things in my life. I studied graphic design but then I skipped it and tried theology which I did for nine semesters and then I cut that off because I realized what I really wanted to do was art and music. It was an explosion to me. I’d never thought of it, it just happened in December 2017 as a revelation.

indieBerlin: You’re a musician and an artist, is it hard for you to balance the two?

I feel like each inspires the other. And that’s maybe why I called my album The Art of Life. Every time that I paint I feel like I’m rehearsing for my music, as a lot of inspiration comes from creating art.

indieBerlin: Do you have a specific creative process concerning your music and art?

I feel like its just happening. But for example when I created my album covers or single covers, I was creating them last minute because I had to send them to my distribution service. I was very happy with it in the end because they really were the pictures I needed for the music.

indieBerlin: What emotion stimulates you the most in your creation?

That’s an interesting question. When I was younger I only painted when I was feeling bad and I was painting very dark things like Amy Winehouse was my favorite muse at the time. That really changed. I feel like right now I’m most creative when I’m in a good mood but also when I’m feeling stressed. Also when I start painting, I have something in my mind and this thought evolves throughout the creation process. So I could never say how I feel when I create, even though it does feel like a sort of therapy.

indieBerlin: Are there painters or artistic movements that inspire you? 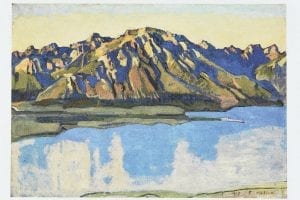 Ferdinand Hodler, I really like his colorful art. He actually had a really difficult life and I really like that he always painted color and joy despite his tragic destiny, he tried to create beauty out of pain.

(iB:) Indeed, Linus’s painting The Queen resembled Odilon Redon’s Les Yeux Clos. Both artworks represented the bust of a woman above a calm and soothing ocean. Redon’s melancholic poetry can be perceived in Cuno’s artworks. The striking colors, the realism 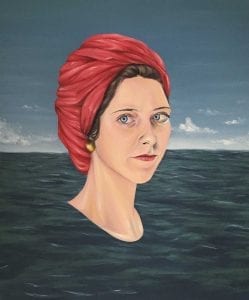 and the passionate representations of souls through bodies and faces are some of Linus Cuno’s artworks strengths.

indieBerlin: Does being an artist in a city like Berlin help or on the contrary is it hard for you to stand out?

I feel like for me, starting here was the best thing I could do. I was just imagining, if I went to Munich for example, people might not be as open as they are in Berlin. But there are a lot of people doing awesome things and it’s definitely hard. It’s the same thing in any other city in Germany because if there aren’t as many people, there aren’t many opportunities either. 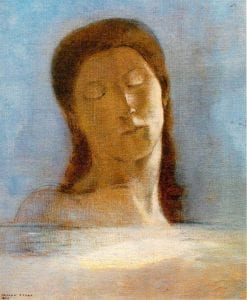 indieBerlin: Between music and art, does one have priority?

The great thing about music is that I can really touch people in the moment and even when I play, it moves you in a way. Art is different because it’s something that makes life more beautiful and some paintings are very political and say something within them which I feel is not the same for my paintings. I just do what I like and follow my emotions. That is maybe why, music is more important for me because it moves me when I write, compose or perform it. But it differs from time to time.

indieBerlin: Could you talk us through the art you chose for your album?

I thought a lot about what kind of art I wanted for the album. I think I was very inspired by a children’s book called The Golden Cage by Anna Castagnoli and Carll Cneut. When I was painting the birds I used for the album cover I was not even thinking of the album, I was just very inspired by the book’s illustrations. I cut them and then I had a session with my photographer and thought it would be nice to combine the two elements. I kind of feel like now I look like the king of the jungle which I didn’t intend to initially (laughs). I chose birds because they represent freedom and expression, they are also very colorful and it fits The Art of Life as it’s an album about finding yourself and being who you are. There’s actually one bird missing, I initially painted 14 birds and then I went to my photographer and I

just lost it on the way.

The Nabi painters gave themselves anecdotal names. Paul Sérusier was the Bearded Nabi, Maurice Denis was the Beautiful icon Nabi. If Linus Cuno lived in the XIXth century, he would probably be called the Luminous Nabi. Coming back to our dear Odilon Redon, he once said: “The artist comes to life for a mysterious accomplishment.” After meeting Linus in his own dwelling, after exchanging questions, answers and anecdotes with him, we believe his mysterious accomplishment will be as grand as his talent and his vital spark. Linus’s debut album The Art of Life will be out on the 13th of December, a day on which he will also have his release party at the very cosy Hangar 49. While you impatiently wait for his album, listen to his songs Water Under the Bridge and Why Do I Feel Sad and check out his colorful portfolio, right here.