Norwegian artist Jenny Hval’s most recent album, The Practice of Love, marks a significant development in her discography. In the past, both as Jenny Hval and Rockettothesky, the singer and multi-instrumentalist has established herself as an experimental, folk-leaning indie act. This experimental edge in her work has always been rooted in her brazen lyricism, which […]

Norwegian artist Jenny Hval’s most recent album, The Practice of Love, marks a significant development in her discography.

In the past, both as Jenny Hval and Rockettothesky, the singer and multi-instrumentalist has established herself as an experimental, folk-leaning indie act. This experimental edge in her work has always been rooted in her brazen lyricism, which has never shied away from—and, in fact, dwelled deeply upon—themes of sex, sexuality, birth, death, and alienation. The adoption of these themes in the unassuming tone of Hval’s light and airy vocals only contributes to her music’s jarring and remarkable qualities.

In her latest album, The Practice of Love, however, Hval augments her shimmering electronics with a pulsing dance beat and an unprecedented electro-pop sound. Many new listeners may find themselves ensnared by the rippling synths and powerful, melodic vocal performance that define the new batch of eight songs. While the album’s forerunners, the highly conceptual 2016 LP Blood Bitch and more recent 2018 EP Spells, did hint at Hval’s capability of seizing such a sound (such as in “Female Vampire” and “The Long Sleep”), a full embrace of this more accessible direction could not have been anticipated. But with this sharp spike in accessibility follows the question – will Jenny also stay experimental? The three-night run (15-17.2) of her show at Hebbel am Ufer, also titled The Practice of Love, left no doubt in the minds of spectators that Hval’s shift in musical direction would not at all compromise her long-standing, boundary-pushing vision.

Not merely a concert, Hval’s stage adaptation of The Practice of Love leans more toward the realm of performance art. The show elaborates on the themes of the album and those persistent within her body of work, completing the ambitious vision to which the album was only able to allude. Themes that dominated both the recorded album and live performance include birth and death, the chance of life, the impulses of the body, base sensory stimulation, and, of course, the indescribable affinity that is love. When considering the full multimedia performance as the work, The Practice of Love does not, in fact, give up any conceptual ground despite its poppier veneer. If you enjoyed the album musically but found yourself at a loss with respect to its lyrical content, the live show is sure to answer all the right questions and continue to ask many more.

Hval and her troupe of five performer-instrumentalists entranced the audience for the show’s full 90 minute duration as they spun across the assorted scenes on stage: a camping tent, a table of musical equipment, a pile of sand encircled by off-kilter, otherworldly cones, and a backing screen towering over it all. As strange as the setting were the actions of the performers themselves, who found themselves doing everything from making shadow puppets and playing cat’s cradle to ritually sifting through the sand for buried oddities to be employed in the performance. Almost as if a twisted musical, the show broke down neatly into scenes with which the songs of the album swelled and ebbed as a soundtrack.

Particularly significant to the performance were the choreographed sensory stimulations and physical references that Hval and the other performers invoked. For example, Hval repeated the symbol of two fingers throughout the show and made it visceral, if not fetishized, for the audience. The swipe of a computer trackpad, the sign of the cross, the beckoning of a hand, and many others perpetuated this symbol between Hval, her performers, and the accompanying digital media. The immediacy felt in the senses persisted as the performers sifted through the mound of sand throughout the show, and it rose to its height when all music stopped and the performers mimed with their eyes shut to something playing only for them in their own individual earbuds. The spellbound audience maintained its silence perfectly in order to take in every bit of the sensorially intense experience.

the magic of the live rendition came from the extended, often ambient instrumental riffing that extended the 33 minute album to a full hour and a half

The intricacies of the physical performance did not overpower the music, however, but integrated seamlessly with it to further Hval’s expansive vision. For most of the show, at least half of Hval’s band was playing an instrument or contributing to the total sound at one time. This created a refreshing variety in instrumentation on each track and allowed the audience to form a satisfying personal connection with each sound as cast members visibly went to and from their posts at the instrumental table and other performance locations. Other than a lone saxophone and the vocals from Hval and a few of her collaborators, the rest of the music was created electronically with a wide array of computers, keyboards, microphones, and programmable pads. Those familiar with the LP would agree that the quality of the sound produced was extremely faithful to the lush, floating tones and driving percussion of the original, while the magic of the live rendition came from the extended, often ambient instrumental riffing that extended the 33 minute album to a full hour and a half.

Hval’s own contribution to the performance fluctuated between blending in with her uniformed collaborators and reveling in the spotlight as the namesake and creative director of the show. An endearing moment came when the other performers reduced their music to a simmer and Hval stepped forward for a self-proclaimed “story time” segment, in which she recounted the tale of a lion cub (don’t forget track #1 – “Lions”) unable to drink from a straw in the most comfortable, humorous, and yet self-aware and impactful manor. Her vocal performance matched this delivery for the majority of the show, feeling piercing and yet unassuming. On the other hand, although she seemed to be a naturally unimposing personality, the artist also displayed a true star power fit for the stage when the music lifted to a climax from among drifting soundscapes and spoken word musings. Such highlights of her performance included her showmanly navigation of her shadow through a series of projected landscapes and her deft use of her hands projected live on screen behind her as she wrote in a notebook and demonstrated the two-finger swipe on a prop computer.

The result is a monumental, multimedia exploration of the life-death continuum in which Hval and her fellow humans scramble

The incontestable height of the performance came when the band played the album-closer, “Ashes to Ashes.” In this track, Hval sings in the verse, “I had a dream about this song / That I had not written yet.” In “Six Red Cannas” and “Ordinary,” too, Hval confirms that she thinks and dreams in songs and the written word rather than simply in direct speech or action. The artist relies on the arts for her full and truest self expression. It is only fitting, then, that during the performance of this song all the performers on stage feverishly dug together through the ever-present sand, giving meaning to the strange symbol and binding the concepts of sand in the performance to ash from the album. The result is a monumental, multimedia exploration of the life-death continuum in which Hval and her fellow humans scramble. Although there is even more to unpack in the symbolism here, it is enough to say that this moment gave context to the entire performance piece and confirmed the true conceptual depth of which Hval permits a glimpse in her latest album. Yes, it is safe to say that Jenny is still asking the big questions and still looking for answers in all our favorite places – art and music. 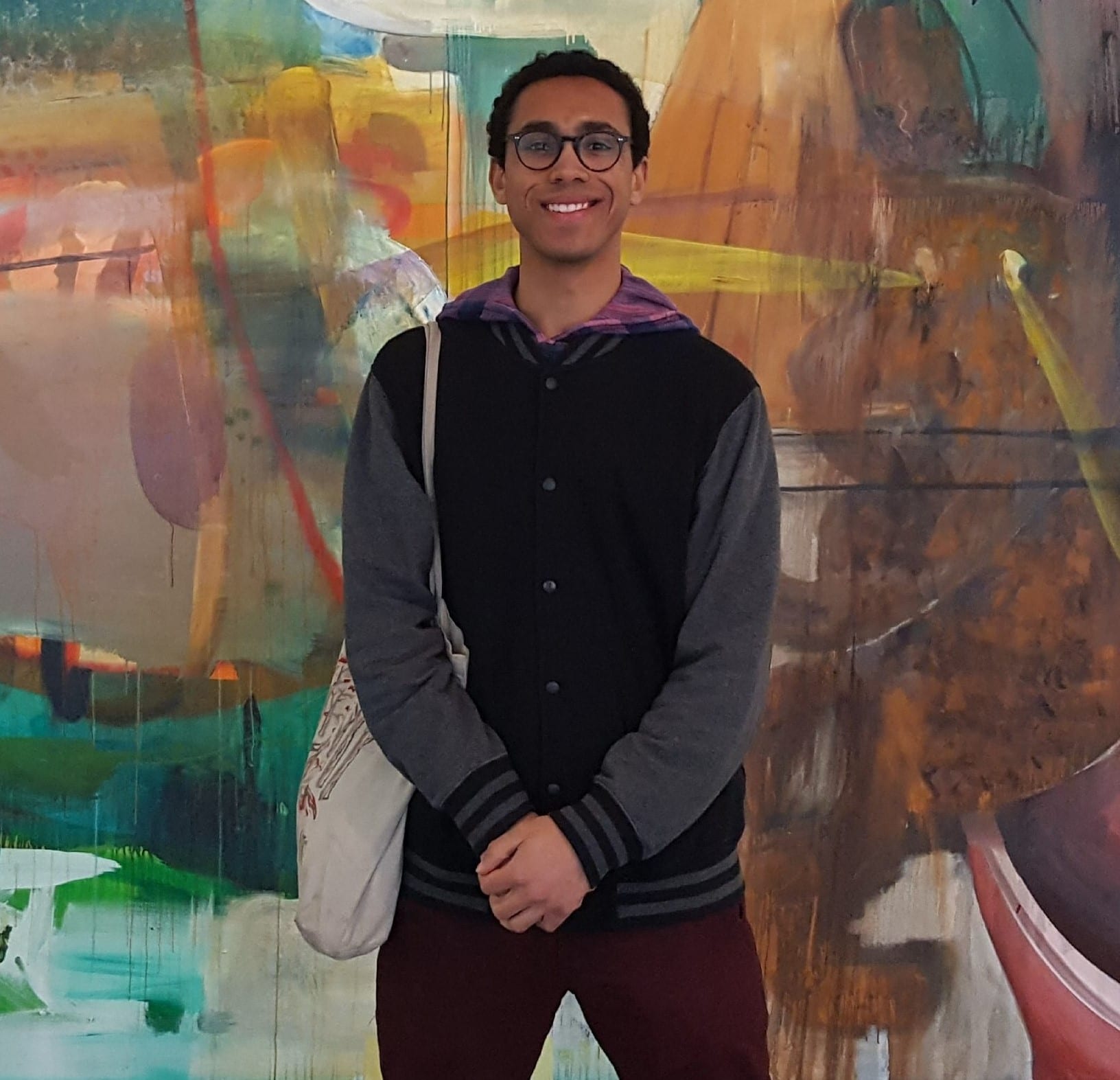 From Boston – a city known for 1 rapper, the Dropkick Murphys, and a surprisingly solid hardcore scene – Danny is more than excited to be kicking it here in Berlin