Marbles Lost is a Danish / Faroese Folktronica duo, consisting of singer Maria Mercedes Lindeskov and e-drummer René Thorny. Maria Mercedes, who has released songs and performed as a solo artist since 2016, has now chosen to expand the band. Marbles Lost has something on their mind. As an activist, Maria Mercedes fights in the […] 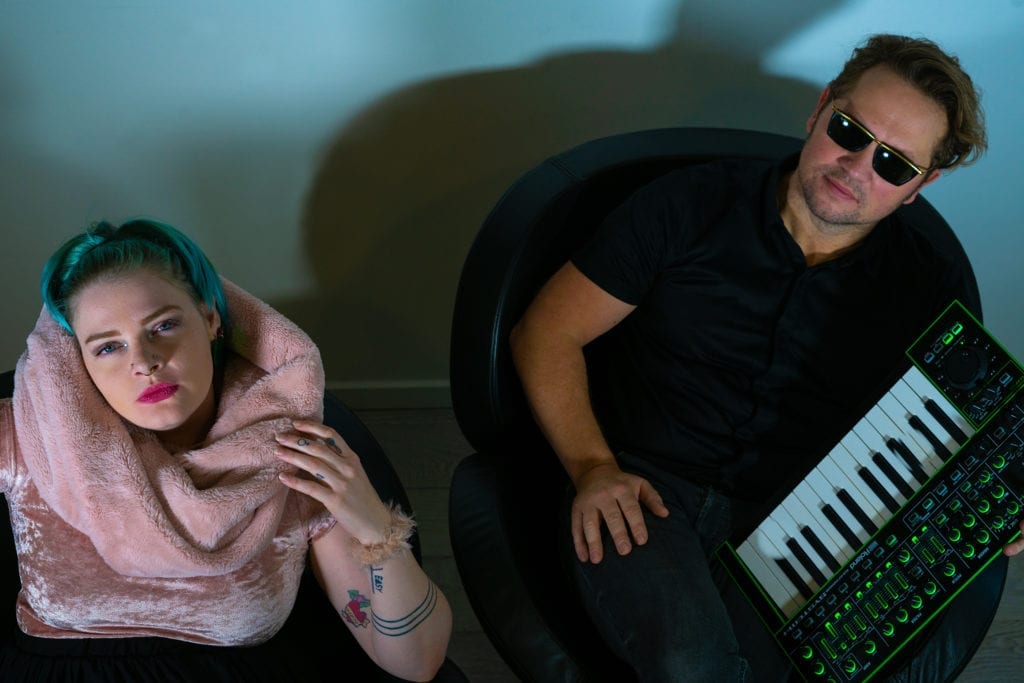 Marbles Lost is a Danish / Faroese Folktronica duo, consisting of singer Maria Mercedes Lindeskov and e-drummer René Thorny. Maria Mercedes, who has released songs and performed as a solo artist since 2016, has now chosen to expand the band.
Marbles Lost has something on their mind. As an activist, Maria Mercedes fights in the streets, on the stage and through the music for various important topics. Topics that Maria Mercedes with a clear voice, in the best singer-songwriter style, passes on. Despite its Folktronica arts community, Marbles Lost isn’t firmly locked into any particular genre or soundscape. This is evident when you listen to Marbles Lost live. There is room for acoustic tracks with ukulele and fuller 80s inspired synth pop arrangements. If you are interested in the technique behind Marbles Lost, there is also a bit of candy for the eye.

Marbles Lost has had a lot of eyes on them lately. Aside from radioplays in The Faroe Islands close to daily, they have been played on The Best New Bands on Radio Alex 91.0.
They landed their first front page with their new single Hazy. The front of the local newspaper in the city where Maria Mercedes used to live, before she moved to Berlin.

Today, we’re happy to be able to present the release of their music video Hazy.

We had the chance to interview Marbles Lost:

indieRepublik: How did you come up with the name Marbles Lost?

Maria Mercedes: That’s actually a quite funny story. I moved to Berlin in the summer of 2016, to sort of “fly out from my nest”.
I started working as a customer service agent for the car brand Renault, I sure did learn a lot about cars!
As I was looking for musicians to busk with I stumbled upon the IndieBerlin website, and decided to write them.
I met Noel from IndieBerlin, and we started busking together. Back then I mostly did covers and wrote singer-songwriter style songs. Noel told me that I needed a rebranding, and he was definitely right about that (laughing).
So we started brainstorming different artist names for me. Meraki… Mable, those are some of the ideas that I remember. Noel told me that Mable sounded like an old british woman. I told him that I thought of Marbles when I saw the name Mable. Noel told me about the English saying “to lose one’s marbles” – and that’s when we came up with the name Marbles Lost.
It was perfect! I don’t have that many marbles… and I love that my artist name (now: band name) can reflect that!

indieRepublik: How did you get together as a band?

René: It was pretty much the same way most bands get together. Via a Music Collaboration page. I was searching for a female singer for a few months without any success. I was just about to give up when I saw this ad saying something like “Female singer / an upcoming band needs a drummer for live and studio performance”. I called Maria, we went for a cup of coffee and without any further discussions we agreed to give it a try for a gig a month later. The gig went very well. Since we managed to produce a few songs at the same time and felt mutually inspired — it was totally written in the stars that we were going to work together in Marbles Lost.

indieRepublik: What is your new song Hazy about?

Maria Mercedes:  Hazy is about an exhausting relationship, something that I think almost everyone can relate to. A relationship that ends, even though you might not be ready for the ending of it. But you reflect, and you move on. That’s why Hazy is a love song that deals with learning to love yourself first, before you go out and throw yourself into a wild love with someone else. It’s probably because the relationship that I wrote this song about, was a relationship where both parts were missing the love for themselves, and therefore it also ended way earlier than expected. We simply broke each other’s hearts because we didn’t know how to love ourselves. But it was an amazing life lesson to learn at such a young age. I mean, I was only 20 years old, and sure that I would spend the rest of my life with this partner. Now, I’m very happy about where I ended up. And at least I got a great song out of it!”

indieRepublik: Anything to say about the production?

René: Maria was very clear when she told me about HAZY and how she wanted the song to end up. She wanted a simple popsong — very easy to listen to and understand. Nothing too complicated. Instantly I came up with a lot of ideas — and actually most of the ideas ended up in the final track. As always, I wanted to combine old with the new. The sound of HAZY got a clear reference back in time (80s). Originally I wanted to sample cr78 for the verse, but I quickly found four different pre-sampled rythm-parts that worked out very well. It didn’t take more than a week to come up with the full completion, but the start and end were very difficult. I think we did 5-6 different recordings before ending up with something very simple. By-the-way — If you listen closely you will be able to hear a rattlesnake 🙂

indieRepublik: What thoughts did you have about the music video for Hazy?

René: The most obvious choice would have been to create a video telling the full love-story. But we chose to make a more traditional video with focus on Maria singing and showing our odd combination between acoustic and electronic instruments. Furthermore we wanted to highlight Marbles Lost as being a band. The video constantly shows Maria singing while the surroundings change. The video, with its distinctive effects, was inspired by the 80s, where both footage, effects and editing were naive, curious and characterized by the lack of cool technology. The video-sequences with a hand or foot playing an instrument is meant to give the audience a feeling of real musicians playing. All videos have been recorded handheld by small steady-cams or smartphones. We chose to keep the resolution quite raw in order to make the video less naive / more indie :).

indieRepublik: How did your everyday life change with the corona-lockdown as a band?

Maria Mercedes: I don’t really think anything changed for us. We are working like we used to do before corona. I was living in Berlin for the last few months, but sadly had to go back to Denmark because of the lockdown.
But we send our song ideas back and forth in our shared online folder, and do google hang-outs about once a week.

indieRepublik: If Hazy was in a movie/series what would it be?

Maria Mercedes: I absolutely LOVE what René has done with Hazy! It reminds me so much of the intro for Skins UK season 3 and 4 (which are also my favourite seasons of Skins!!!). So it would be in a series like Skins or You’re The Worst or Lovesick on Netflix! A movie could be something like Sierra Burgess Is A Loser or To All The Boys I’ve Loved Before. Maybe even (both the series and the movie) 10 things I hate about you. And I think it would have been perfect for the norwegian series Skam as well (or any other version of Skam, like the german one Druck). Any kind of cool teenage series/movie really! It really gives me that kind of teenager vibe. It kind of makes me miss highschool!
(I just remembered the show Awkward on MTV, it would be perfect for that, too!) It also gives me a Clueless feeling.

indieRepublik: How did you celebrate the release of your first song as a duo?

Maria Mercedes: I think I just chilled out with a couple of friends online, and had some extra snacks maybe! I’m celebrating the release of the music video on the couch with my boyfriend and a good series on Netflix I think!

René: I continued to work on the next song. 🙂 with a good german beer by my side.